The particles from which atoms are made are protons, neutrons and electrons. 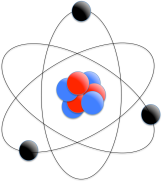 The nucleus (containing the protons & neutrons) has an overall positive charge, and the electrons orbiting around it are negatively charged, so an atom has charge distribution – positive in the middle and negative surrounding this region.

Most of an atom is empty space – protons, neutrons and electrons are very small compared to atoms, but because protons and neutrons weigh much more than electrons, virtually all the mass in an atom is in the nucleus.

Numbers of protons, neutrons and electrons

The total number of protons and neutrons (nucleons) in an atom is the mass number. Therefore   number of neutrons = mass number – atomic number

Because an atom has no overall charge, there must be exactly the same number of electrons as protons in an atom.

What is the number of protons, neutrons and electrons in an atom of scandium-45?

What is the number of  protons, neutrons and electrons in an Sc3+ ion of the same isotope?

Give the identity of a particle with 53 protons, 74 neutrons and 54 electrons:

Definition: Isotopes of an element have the same number of protons (same atomic number) but different numbers of neutrons.

We need a scale to be able to compare masses of atoms, so we need a standard – a fixed value to compare to. The standard is chosen to be an atom of the isotope carbon-12. We define this as having a mass of exactly 12, then compare the masses of other atoms relative to this – so we call the masses we work out relative masses.

The mass of any individual atom is given by its relative isotopic mass.

The ‘weighted mean mass’ means the average mass of an atom, taking into account all the isotopes present and the proportions of each isotope.

Principle: The gaseous sample is atomised by a high energy electron beam.This also removes an electron from some atoms. These positively charged ions are accelerated in an electric field, then deflected by a magnetic field at 90º to their flight path. The lighter they are, the more they are deflected, so the mass spectrometer separates the ions on the basis of their mass. The strength of the detector signal for each different angle of deflection is a measure of the abundance of ions of that specific isotopic mass.

Units:  The x-axis is labelled m/z, (or m/e) which means mass/charge. The ions all have +1 charge, so this is effectively a mass axis. The mass spectrometer is calibrated so that the carbon-12 isotope is given an m/z of exactly 12, so the mass spectrometer measures the relative isotopic mass of the ions directly.

The results are used to calculate the Ar:

The method for working out the Ar value is:

Mass spectrometry shows that a sample of Br has two isotopes; 79Br and 81Br. Their abundances are 50.52% and 49.48% respectively. Show that the RAM of bromine in this sample is 79.99 to 4 significant figures.

Not everything is formed of simple molecules (i.e. substances with giant structures) but these have an empirical formula, so more generally the relative formula mass is the sum of the relative atomic masses in the formula unit. e.g. one formula unit of Ca(OH)2 is one Ca2+ and two OH– ions.

Units:     In all these cases, there are NO UNITS – we’re comparing to a unit-less scale.

When we write balanced equations, the numbers in front (properly called the stoichiometry), are numbers of moles.

As a consequence of using 12g of carbon-12 as the standard, to obtain one mole of a substance, we must weigh out the Mr in grams.

Converting between mass and moles

We use Avogadro’s number to work out actual numbers of atoms, ions or molecules (particles) in a given mass or number of moles of substance, or to work out the mass of a given number of particles.

In addition to the converting between mass and moles, we now need to use the equation:

What does a water molecule actually weigh?

It is more practical to work with volumes of gases rather than with masses. For this reason it is useful to know the molar gas volume (units: dm3 mol-1), which is the volume occupied by one mole of the gas. This will vary with temperature and pressure, but surprisingly does not vary from gas to gas (at least not for what we will consider ‘ideal gases’). 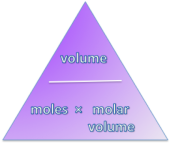 Remember to keep the volume of the gas and the molar gas volume in the same units – either dm3 or cm3!

The other useful property of gases is the density. This allows us to convert between mass and volume. Densities are typically measured in grams per cm3.

What is the volume of 0.10 moles of carbon dioxide at room temperature and pressure?

Our understanding of the structure of the atom has been refined as more sophisticated models have been proposed, and as experimental evidence has supported these models or caused them to be rejected.

Dalton’s model (early 1800s) was one of the first, proposing that atoms where solid spheres, and that each different element was made up of a different types of sphere.

Thomson’s experimental observations (1897) led to the conclusion that atoms could not be solid and indivisible. His results indicated that atoms contained much smaller negatively charged particles, which we now know to be electrons. The model of the atom was refined: a positively-charged sphere with negatively charged electrons embedded within it. This is sometimes referred to as the ‘plum pudding’ model.

Mosely’s work on the charge of the nucleus of different atoms showed that nuclei of different atoms have different amounts of positive charge, the charge increasing from one element to another by units of one. Rutherford investigated further, discovering that the nucleus of an atom contains a number of positively-charged particles called protons, but Rutherford also realised that the nuclei of atoms were heavier than they should be if they contained only protons, and proposed that there must also be other particles with mass but no charge in the nucleus. These particles, neutrons, were eventually discovered by Chadwick supporting Rutherford’s model of the nucleus.

Bohr (1913) proposed a more sophisticated model of the ‘cloud’ of electrons, with the electrons arranged in fixed orbits (shells) each with a fixed energy. He suggested that electrons could move between the shells by absorbing or emitting an amount of energy equal to the difference between the energy levels of the shells. This would mean that the electrons in atoms would absorb or emit electromagnetic radiation (energy) with fixed frequencies. The fixed frequencies of radiation emitted and absorbed by atoms were already known from experiments – Bohr’s model allowed these observations to be explained.

Bohr’s model also stated that the shells could only hold fixed numbers of electrons, and that an element’s reactivity was related to the arrangement of these electrons. His model explained the observation that the noble gases (with their outer shell filled) were found to be stable and therefore unreactive (inert), while the alkali metals with one electron in their outer shell were found to be unstable and therefore reactive.

Bohr’s model is still used as it explains many phenomena such types of bonding between atoms, although even more sophisticated models based on quantum mechanics are available and are needed to explain observations such as the small variations in ionisation energies for atoms of successive elements across a period – we choose to use whichever model is most relevant to the observations we are trying to explain.

It is important to remember, though, that all models are simplifications, made to help us try to understand the complexity of the real world and to explain the experimental observations that we make, so that we can then make predictions and test them.