Organic chemistry is the chemistry of molecules, predominantly associated with living systems, which consist of carbon skeletons with functional groups attached.

These gives organic chemistry its structure and systematic nature.

The simplest example is ethene:

Benzene is an arene, not an alkene.

The haloalkane functional group comprises a halogen atom bonded to the carbon skeleton of the molecule, typically    -I, -Br or -Cl

The alcohol functional group comprises an -OH group bonded to the carbon skeleton. This is also sometimes called a hydroxyl group.

(i) those with the aldehyde functional group, -CHO

(ii)  those with the ketone functional group,  –CO-

(iv) And those with the ester functional group   -COO-

There are other functional groups that we’ll encounter as our study of organic molecules progresses, but these will suffice to understand the basics of naming, structure and isomerism which are covered in this section.

To allow us to focus on functional groups, we sometimes use R- to represent ‘rest of the molecule’, so an alcohol might be represented as R-OH or an ester as R-COO-R’

homologous series: a series of organic compounds having the same functional groups, each successive member differing by –CH2–

Any homologous series can be represented by a general formula. e.g. in the case of the alkanes it is  CnH2n+2      where n is the number of carbon atoms in the alkane.

Alicyclic:  an aliphatic compound arranged in non-aromatic rings, with or without side chains e.g. cyclopentane, 1,2-dimethycyclohexane

We can represent organic compounds using a variety of formulae, each of which conveys different amounts of structural information. Using hexane as an example, we can see the types of formulae used:

In order of increasing amount of information:

molecular formula:  the actual number of atoms of each element in a molecule. For hexane, this is C6H14

displayed formula:  a 2-D representation of 3-D molecules, but showing each atom and the bonds between them, using a line (stick) for each covalent bond.  For hexane, the displayed formula is:

structural formula:  the minimum info necessary necessary to show how the atoms             are arranged in the molecule, in a linear text form. Hexane is   CH3 CH2CH2CH2CH2CH3

We can also use brackets in structural formulae to simplify them:  CH3(CH2)4CH3

skeletal formula:  shows the bonds making up the carbon skeleton, but omits C atoms and C-H bonds so that it emphasises functional groups. So that each C-C bond can be differentiated, the carbon skeleton zig-zags with a carbon atom at each turning point. This also better resembles the 3-D shape of the molecule, as the bond angles are typically less than 180º.

If unsure about drawing skeletal formulae, start with the displayed formula. Remove all C atoms, make the chain a zig-zag so that you can see where one bond ends and the next starts. Remove all C-H bonds and the H atoms on them, but leave any other groups containing H atoms such as –OH. Look at examples carefully to see how they work.

The naming rules, standardised by IUPAC, precisely describe the structure of molecules and give them unambiguous names.

The basic rules are:

1:  The starting point (stem) of the name comes from the longest carbon chain (it may not necessarily be drawn straight – follow the bonds!)

2:  When the longest chain has branches off to the side, these are named by counting the number of carbon atoms in the branch, selecting the appropriate name, and adding the suffix  -yl to the name.

4:  If we have more than one of the same side group, we use a ‘di-‘, ‘tri-‘ etc. prefix and       locant numbers in the form 2,3- where needed. Numbering starts at the end of the chain which will result in the name having the smallest numbers in it.

5:  If different alkyl groups are present they are named in alphabetical order, and locant numbers are used to show where they are attached to the chain:

6:  If the carbon skeleton forms a ring rather than a chain we use a cyclo- prefix. NOTE: when writing structural formulae for rings we need to show that they are not chains, so the formula becomes more like a displayed formula.

All the other rules about numbering and naming branches still apply in the same way.  If locant numbers are used, they start with one of the carbons where a group is attached and go whichever way around the ring will result in the smallest numbers in the name.

7:  Alkenes use the same stem, but the -ane changes to an -ene ending. If the position of the C=C is ambiguous, a locant number is used just before the -ene. We only need to give the location of the carbon atom where the C=C starts – the one with the lowest number using the normal rules to decide where to start numbering.  All the previous rules about naming rings and branches apply in the same way. Note: it is not required to show the double bond using = in a structural formula, but it does make things clearer.

If we have more than one C=C then the name ends with –diene or –triene etc., and we keep an ‘a’ on the end of the name for the chain or ring. In almost all cases we will need locant numbers to show where each double bonds is located:

8:  Haloalkanes are named the same way as alkanes with alkyl branches, using locant numbers if needed to show which carbon the halogen is bonded to, and –di or –tri   prefixes if there are more than one of the same halogen atom:

9:  Alcohols are named in a similar way to alkenes, with an –ol ending and a locant number immediately before, if needed, to show which carbon has the –OH group on.

If there is more than one –OH group then we name the molecule as a –diol or –triol etc. and we need locant numbers to show where the -OH groups are attached. We also include the “e” from the alkane name, which we didn’t do when only one –OH group was present.

10:  Ketones are named in a similar way to alkenes, with an –one ending and a locant number just before it to show which carbon is the one in the C=O functional group where this is needed to avoid ambiguity.  Remember, a ketone functional group cannot be on either end of a chain – there must be a carbon either side of the carbon in the C=O group.

11:  Aldehydes have -al name endings and carboxylic acids have -anoic acid name endings. Because these functional groups can only occur on the end of a carbon chain they do not need a locant number, but when numbers are needed to identify the positions of other groups e.g. alkyl- branches, numbering starts with the carbon of the aldehyde or carboxylic acid group. 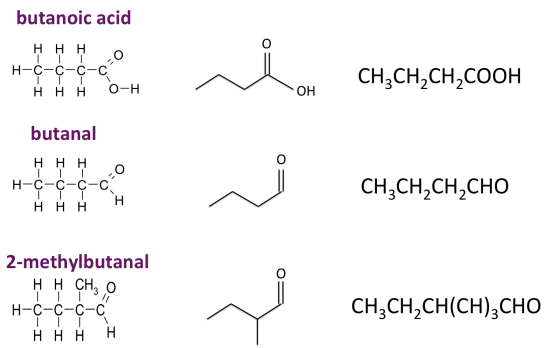 How covalent bonds are formed

We know that a covalent bond consists of a shared pair of electrons, and that these two electrons are provided by the atoms between which the bond will be formed, but it is useful to know more about where these electrons are located and how that affects the molecule.  Our theory of atoms has extended to the idea of electrons being located in atomic orbitals – for example spherical s-orbitals and lobe-shaped p-orbitals. We now need to extend this theory to include molecular orbitals: regions of space in which bonding pairs of electrons are found.

A molecular orbital is created when a pair of electrons form a bond, and can be thought of as resulting from the overlap of atomic orbitals from the bonded atoms.  We will consider two ways in which this might happen. The first of these is the direct overlap of two orbitals – for example two s-orbitals, or an s-orbital overlapping with a p-orbital. When this happens a molecular orbital called a sigma-orbital (σ-orbital) is formed between the two atoms. This is a single covalent bond.

Note that the σ-orbital lies along the axis between the two nuclei. Rotation can take place around this bond. Note also how the majority of the space inside the sigma-orbital is between the two bonded nuclei.  Being confined to this region of space means that the negatively-charged electrons exert an electrostatic attraction on the two nuclei, bonding them together.

When  two bonding pairs of electrons are involved in bond formation between a pair of atoms, we have a double covalent bond, for example between the two carbon atoms in an alkene or between the C and O atoms in a carbonyl group. The first bonding pair of electrons form a σ-orbital exactly as described above.  The second bond is quite different, being formed by the sideways overlap of two p-orbitals. This sideways overlap leads to the formation of a molecular orbital called a pi-orbital (π-orbital) which is located above and below the σ-orbital.

Note that because the π-orbital is above and below the axis between the two bonded atoms, rotation around this axis would require the bond represented by the π-orbital to be broken. There is thus an energy barrier to rotation, and as a consequence there is restricted rotation around a double covalent bond.

We can break a single covalent bond in two ways.  Using a molecule of HBr as an example: 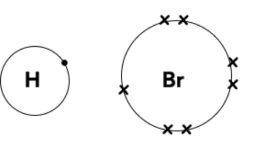 Each atom can receive one electron from the bonding pair. Each atom now has an additional single unpaired electron. Atoms or groups of atoms with unpaired electrons are known as radicals. Breaking a bond so that this happens is known as homolytic fission.

If a bond is broken homolytically, the energy to do this is usually provided by ultraviolet light or high temperature.

Unpaired electrons are represented by a single dot. As an example, the homolytic fission of chloromethane to form a methyl free radical and a chlorine free radical may be represented as follows:   CH3-Cl       →        ·CH3   +    ·Cl

Alternately the bond may be broken so that one atom gains both of the bonding pair of electrons, hence forming a negative ion, and leaving the other atom with a positive charge. This is heterolytic fission. The more electronegative element is the one which takes both the electrons.

The movement of two electrons, from the bond to the same atom, is shown using a curly arrow.  For example, the heterolytic fission of bromomethane to form a positive methyl ion and a bromide ion may be represented as:

This curly arrow means “the C-Br bond breaks and the two electrons in the bond both go to the bromine atom”.

Note:  Care with curly arrows. They must come from a bond or a lone pair, and go to an atom.

Note:  Two dots may be used to show an unbonded (lone) electron pair

The CH3+ ion is an example of a carbocation  (CH3– would be a carboanion).

We should be able to recognise three basic types of reaction, regardless of the actual reactants and products:

Addition reactions – in which two reactant molecules join together to produce a single, larger product molecule. This can be recognised because there will only be one product substance after the à in the equation.      e.g.     C2H4 + HCl  →  CH3CH2Cl

Elimination reactions – in which a small molecule is removed from a larger one. This can be recognised because there will be one substance before the → and two after.  e.g.     CH3CH2CH2OH  →  CH3CH=CH2 + H2O

Substitution reactions – in which an atom or group in a molecule is replaced by a different atom or group of atoms, with the rest of the molecule remaining the same. e.g.     CH3Cl + OH–   →   CH3OH + Cl–