…having the same molecular formula but different structural formulae.

In this type of isomerism, the sequence in which the atoms are bonded is different for each isomer. We can see this in the structural, or displayed, or skeletal formulae for the isomers, and the fact that the isomers will have fundamentally different names.

Because of their different structures, structural isomers are likely to have different physical properties, and different chemical properties especially when their functional groups differ.

Even if the atoms are bonded in the same sequence and have the same functional groups, there are still ways in which they can be different, and as a consequence have different properties. One way in which this can come about is when rotation of the bonds within a molecule is restricted or prevented. This is the case with the carbon to carbon double bond in alkenes, and leads to isomers labelled cis- and trans- or labelled as E- and Z-. Another way in which molecules can have a different spatial arrangement is when they are mirror images of each other that can’t be superimposed. We call this optical isomerism.

Here the restricted rotation around double bond results in two isomers. These two isomers may have different chemical properties.

The explanation for this, that the acid from the tomatoes or apples has the acid functional groups on the same side of the double bond where they can react, while the acid from the wild flower has the acid groups on opposite sides of the double bond where restricted rotation around the bond prevents them from reacting, gained van’t Hoff the first Nobel Prize in Chemistry for his contribution of the ideas of cis- and trans- isomers in stereochemistry.

Many alkenes satisfy the first criterion for stereoisomerism: having a different atom or group on each carbon of the C=C, but do not satisfy the second one as they don’t have a common atom or group on each C atom of the C=C.  The restricted rotation around the C=C still means that we will have two stereoisomers, but we need a naming convention to identify them that applies more generally.

We use Cahn-Ingold-Prelog rules (CIP rules) to designate one atom or group on each carbon of the C=C as the priority group, and then name them as a Z-isomer if the priority groups are on the same side, or an E- isomer if they are on opposite sides of the C=C.  A simple way of remembering which isomer is which is E = EITHER SIDE,  Z= ZAME SIDE.

Note that we can always identify a priority group, so this way of identifying isomers of alkenes works for all alkenes, including those for which cis- and trans- could also be used. As such, the simpler cis- and trans- notation is becoming less widely used.

Notice that although we have used the same molecule for both examples of cis-/trans- isomer and E-/Z- isomers, the cis-/trans- decision was based on where the common groups, in this case the -H atoms were located, whereas the E-/Z- decision was based on the priority groups which were in this example the methyl and ethyl groups. It is therefore important to realise that a cis- isomer is NOT always a Z- isomer, and a trans- isomer is NOT always an E- isomer.  To appreciate why this is the case, we need to understand how to apply CIP rules to find the priority groups.

In molecule A, starting with the carbon atom on the left if we step outward we get to an H atom and a Br atom. The Br atom is heavier so Br is the priority group on that side. Now looking at the carbon atom on the right and stepping outward we get to an F atom and a Cl atom. The Cl is heavier so Cl is the priority group on this side. Br and Cl are on opposite sides of the C=C, so this is an E-isomer:  E-2-bromo-1-chloro-1-fluoroethene.

Note: it is the first point of difference that determines the priority group, not the overall mass of the group. Molecule E would still be an E- isomer even if the group on the top right were a very long alkyl chain with a total mass exceeding that of the -CHClCH3 group on the bottom right.

Another form of stereoisomerism occurs at carbon atoms that have four different atoms or groups attached to them.  Because the shape around such carbon atoms is tetrahedral, there are two non-superimposable mirror image molecules having the same structure but a different 3D spatial arrangement.  We might refer to these as optical isomers, or enantiomers. A carbon atom having four different atoms attached to it is referred to as a chiral carbon, and may be indicated with an asterisk *.

We draw the two optical isomers by drawing the mirror plane between them, then drawing the 3D tetrahedral arrangement for each molecule as mirror images. While there are labels (D- and L-, or laevo- and dextro-) we are not required to be able to label optical isomers, only identify when they exist.

It can be a challenge to find chiral carbon atoms in larger molecules that are displayed skeletally. It is important to remember that C-H bonds will not be shown in the skeletal formula, but they are there! 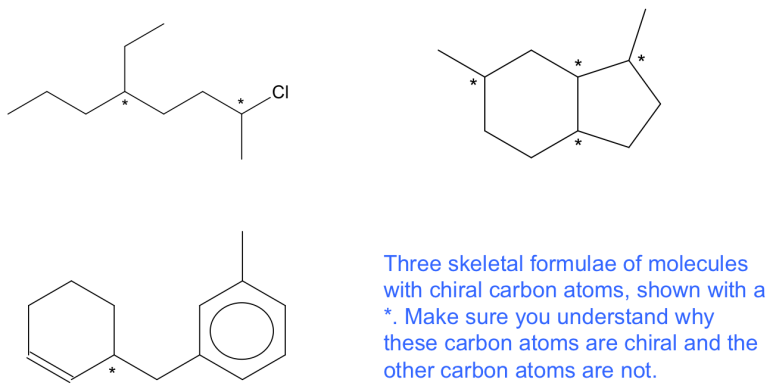